An epic fishing adventure at the Arctic Circle

Posted by Travel Like This | Oct 28, 2019 | Get outside, PREMIUM membership, Things to do in Canada, Travel

NOT YET A PREMIUM MEMBER/ACCOUNT HOLDER?
This content costs $29

“Well, I guess I actually have to do this now that we’ve come all this way,” says Jeff warily as he eyes the cloud of mosquitoes that tracks our every move and bounces off the nets that cover our heads.

And with that, he casts off every stitch of clothing save for his boxer shorts, wades a few steps off the spongy shoreline and dives into Rogers Lake before dozens of bloodsuckers have a chance to dig into his fresh pink flesh.

“It’s warmer than I expected,” he exclaims cheerily. But that doesn’t mean it’s the place for a leisurely swim. After a few obligatory breaststrokes in the flesh-numbing water, he scrambles back onto land, where he’s met by us spectators with a celebratory shot of whisky to warm his bones before putting his clothes back on.

As brief as it was, this polar bear dip was the culmination of months of planning and several days of travelling that brought us to the Arctic Circle at the tail end of summer. My old friend Jeff Rogers organized a bucket-list-style expedition to explore and fish the pristine waters of Great Bear Lake, the largest lake entirely in Canada and approximately 800 km north of Yellowknife, N.W.T.

Known for its world-record-setting lake trout as well as Arctic grayling, Arctic char and northern pike, Canada’s largest lake only hosts a handful of hardy fishermen owing to its remote location, sparse amenities and the fact that it’s only free of ice for a few months each year.

Jeff managed to round up 10 guys who were up for the trip. While all of us are avid fishers or outdoors enthusiasts, it was still a remarkably diverse group, ranging in age from 20-something to senior citizen with origins from Newfoundland, Scotland, the Netherlands and Australia.

The Arctic Circle Lodge, run by Dean and June Curry, is rustic but makes a comfortable basecamp for your fishing adventures. Photo by Grady Semmens

“Fellas, there is no bad place to fish up here,” said Dean Curry, the affable caretaker of the Arctic Circle Outpost Lodge, one of several rustic accommodations around Great Bear Lake that have been operated for decades by Winnipeg-based Plummer’s Arctic Lodges. Dean and his wife June gave us a rundown of their facility shortly after a vintage Otter floatplane dropped us off at their dock.

“You’re going to have an amazing time,” he said after giving us the highlights from what was their first summer spent in the North after retiring from their jobs in Ontario. “It’s absolutely stunning and every day is an adventure, but make sure you are prepared because you’re really on your own out here.”

Dean was right. When it came to epic fishing, amazing scenery and raw wilderness, this place did not disappoint. 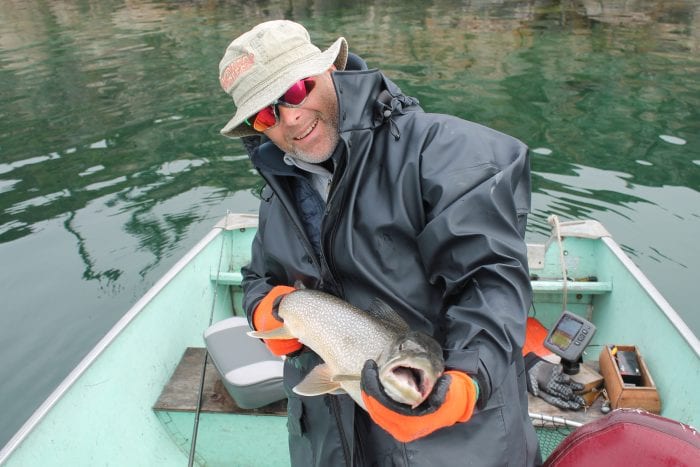 Grady Semmens does the hug and release photo op with one of many fish he caught. Photo by Grady Semmens

Our group’s routine involved rising to a hearty breakfast at eight o’clock each morning and heading out in pairs for several hours of fishing the nooks and crannies of McTavish Arm on the eastern edge of Great Bear Lake.

The fishing was spectacular, even for a novice like me. It was unusual to go more than 10 or 15 minutes at a low-speed troll without getting a bite from a lake trout. Reeling them in was great fun, as the average fish was about 10 pounds and they always put up a serious fight. Their silver backs and reddish fins would flash in the light as they spun and flipped while being pulled to the side of the boat.

Following the “hug and release” practice encouraged by Plummer’s, we would often bring the larger fish into the boat for a quick photo, while unhooking the smaller ones in the water and watching them dart back to the green depths below.

By mid-afternoon, with arms weak from angling and stomachs growling for a meal, we would gather our little steel boats on a patch of beach or a flat rock landing for a leisurely shore lunch.

These parties grew a bit more elaborate each day, with a campfire to quell the chill off the lake and to cook up three to four fish that were kept from the morning’s catch. Bottles of wine, baked beans and canned corn usually rounded out the menu, followed by catnapping in the sun and planning the remainder of the day’s excursion.

The hikers in the group would normally take advantage of the late afternoon warmth (highs for the day were typically 15 to 20C in mid-August) to stretch our legs and scramble up to the high point of a nearby island or peninsula for panoramic views of untouched wilderness as far as we could see in every direction.

Tramping across the untracked landscape was interesting, as route finding was always required. Every few hundred metres would yield an interesting formation in the pink northern granite, a discarded caribou antler, a thick ball of alien-looking lichen or the occasional rusted remnant of an earlier human visitor that was worth stopping to examine. 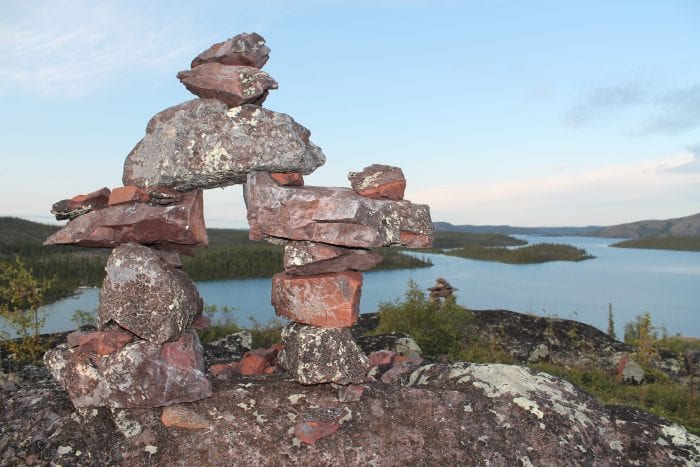 Exploring the shores of Great Bear Lake, we discovered all kinds of interesting things on this untouched wilderness. Photo by Grady Semmens

For Jeff, the icing on the cake was discovering a small lake bearing his family name on the maps of the region. His goal was to swim in Rogers Lake, so on our third day we piloted our 20-horsepower outboards to Hunter’s Bay to take care of business.

The morning’s fishing was good as always and included an excursion up the mouth of the Harrison River at the end of the bay. There we found the ruins of an abandoned trapper’s cabin that looked like it was last used in the 1950s, based on the artifacts left behind.

After another hearty lunch, the whole gang went on the half-hour bushwhack through the ragged pines up to the glassy lake where we found two rowboats on the shoreline that we figured must be the property of Indigenous people to fish the smaller and warmer waterbody about one km from Great Bear Lake.

After Jeff’s swim, we gathered around one of the boats for a group photo before making the long trip home to a piping hot turkey dinner with all the trimmings, followed by our usual evening of poker and socializing around the lodge’s stone fireplace.

The week flew by as we visited most of the area within an hour’s boat ride in every direction from the lodge. Sure enough, our final morning of fishing proved to be the best for me. With bite after bite, we toured the deep water below cliffs that were the domain of a lone bald eagle who kept a watchful eye on our progress. 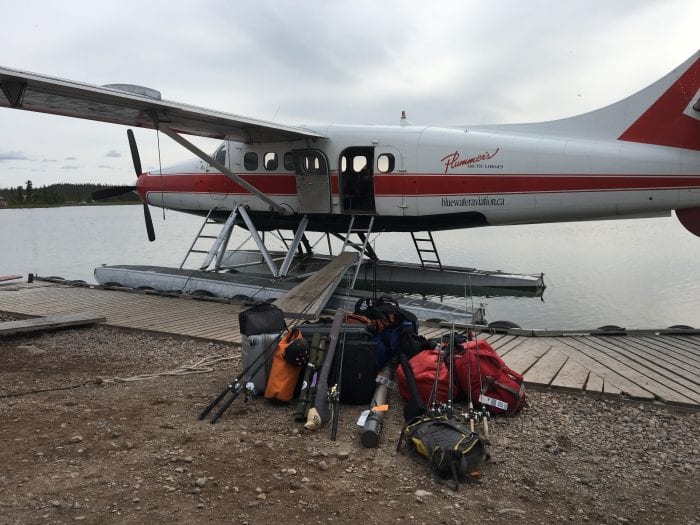 It’s quite a trek to get here but is so worth it for the fishing and raw beauty of the landscape. Photo by Grady Semmens

As the clock ticked down before we had to head back to catch our flight out, I felt the unmistakable jerk of a fish on my line. My boat-mate Ian killed the motor as I began reeling in what felt like a monster fish.

Bracing myself with one leg on the side of the boat, it took all my effort to pull the fish towards the boat. I wasn’t able to see it before it dove directly beneath our boat.

After a few minutes of struggling, I was close to reeling it in when the fish gave a mighty pull that bent my rod into a tight arc and took all my strength to hold onto.

It easily felt like the biggest fish I had ever caught, but just when it felt like he might be close enough to haul into the boat, he managed to pop off the hook and escape.

It was obviously time to call it quits and head back to the lodge and begin the long journey home. Just my luck that my last one was the one that got away. If that isn’t a good enough reason to go back to Great Bear Lake one day, I don’t know what is.

Grady Semmens is a Calgary-based freelance travel writer and former newspaper reporter who works in corporate communications in Canada’s energy sector. You can follow him on twitter @gsemmens or on Instagram @greywolfgrady

Why point-and-shoot cameras are still relevant